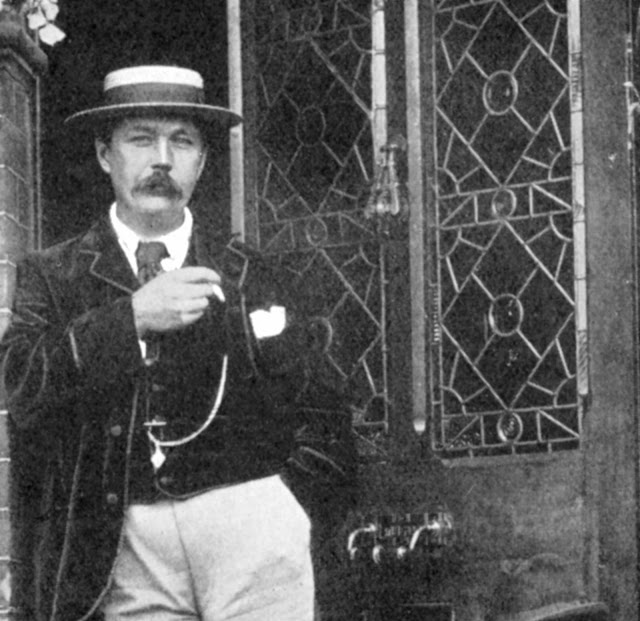 Sir Arthur Ignatius Conan Doyle was born on the 22nd of May in the year 1859 in Scotland and had a bit of a scattered upbringing with his family splitting up due to his Father's alcoholism and later joining again before his Father's passing. During this time they were living in small tenements and Doyle would often write letters to his mother, many of which are archived and preserved to this day, thus began his love of writing. Doyle was able to get a quality education thanks to the funding of wealthy uncles and was not afraid to speak out about his experiences during his schooling like how the school was run on principles that didn't exactly lend themselves to a productive learning environment. Before Doyle became famous for his writing he was actually a doctor and studied medicine and practical botany between the years of 1876-1881. 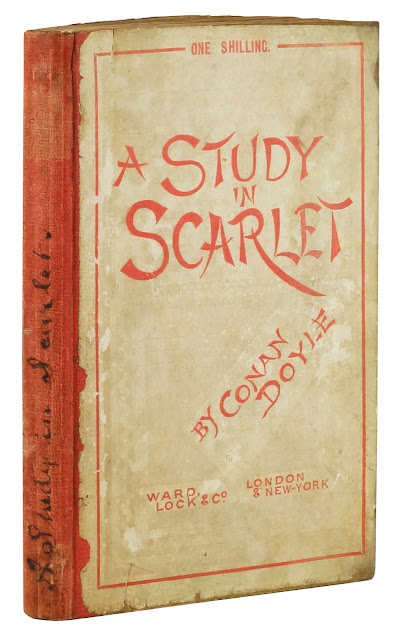 Doyle's first short story including the now legendary Sherlock Holmes and Dr. Watson called A Study in Scarlet was written in only 3 weeks and was published but Doyle only got about £2,900 in current day funds but this would be the start of a long and prosperous writing career. Enough of the backstory though, let's get in to how Montblanc have decided to honor him with their newest writers edition collection for 2021. 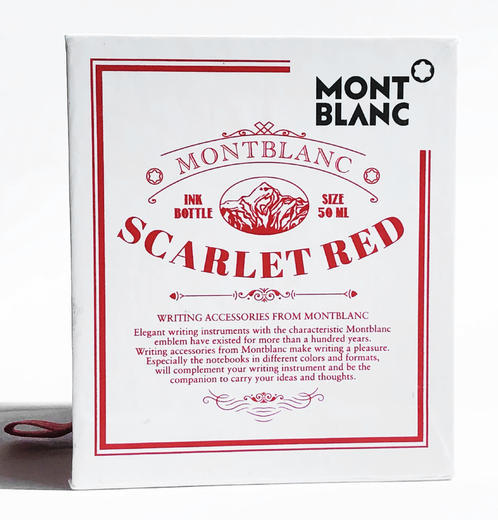 Buy Product
The special ink that is part of the release was aptly named Scarlet Red as a reference to the first book the mystery investigating duo of Holmes & Watson first appeared. The ink comes in the standard special edition box that has a drawer design and when this drawer is pulled out you get a square shaped bottle of ink that is the standard for most of the Great Characters or Writers Edition inks. The design on the actual box is a very cool looking design that doesn't really have much to do with Sherlock or Doyle (its possible the reference flew right over my head) but to me it looks like a design from the beginnings of the brand and what the packaging for their ink may have looked like in the early 1900's. 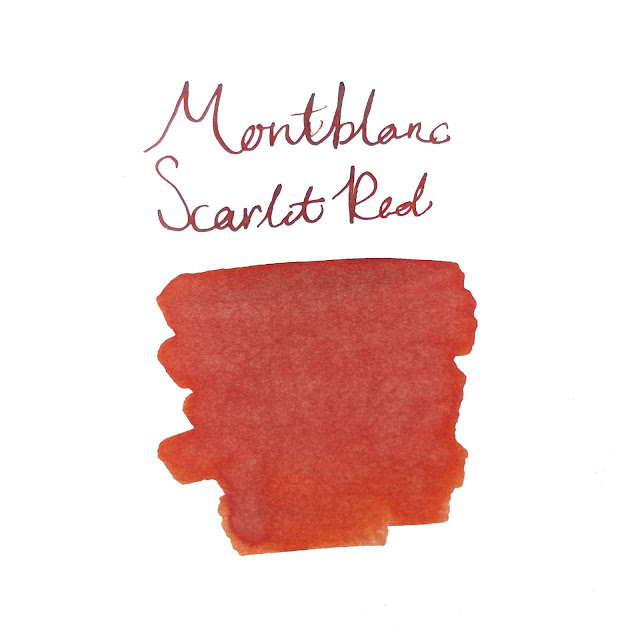 As far as the actual color of the ink is concerned it is a nice darker red that is not quite as eye-popping as some currently on the market. They did a pretty good job of making it the same or similar color to the binding and lettering on the 1st edition of A Study in Scarlet. 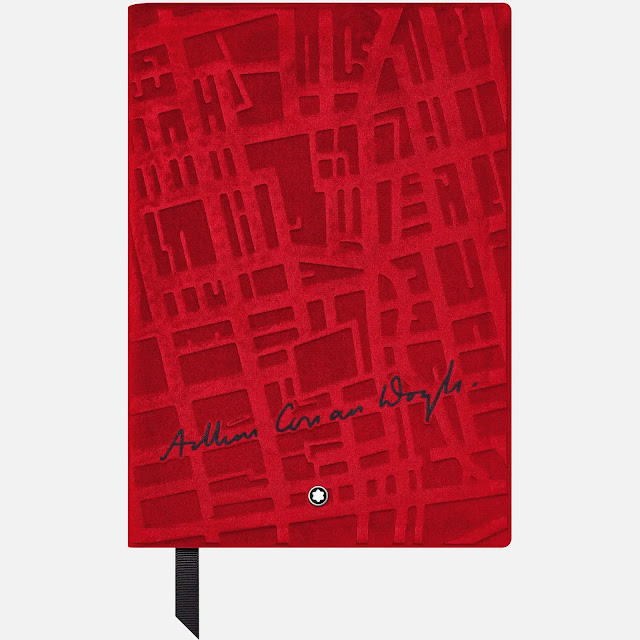 Buy Product
In addition to the ink, Montblanc also released a notebook in their 146 size which is similar to an A5 notebook but this is not just any notebook. The cover is adorned with a soft red woven velvet that is embossed to look like a map of London which is where the character Sherlock Holmes lived. In addition to this pattern the cover also bears the author's signature just above the MB star logo badge towards the bottom of the book. 96 sheets of silver cut lined paper are in the notebook as well as a black cloth bookmark to help keep your place when writing or save the spot of an already written page. Who knows, maybe you'll write the next great mystery story in your own Doyle notebook!

Buy Product
Finally we get to the crown jewel of the 2021 writer's edition, the actual pens and pen pouch to match. I'll be focusing mainly on the fountain pen for this blog but we have pictures of all the pens on our website so after your done reading this blog feel free to hope over there and check it out. The pen is mainly made up of a deep blue precious resin that MB says is supposed to conjure the feeling of the foggy and mysterious streets of London as described by Doyle. 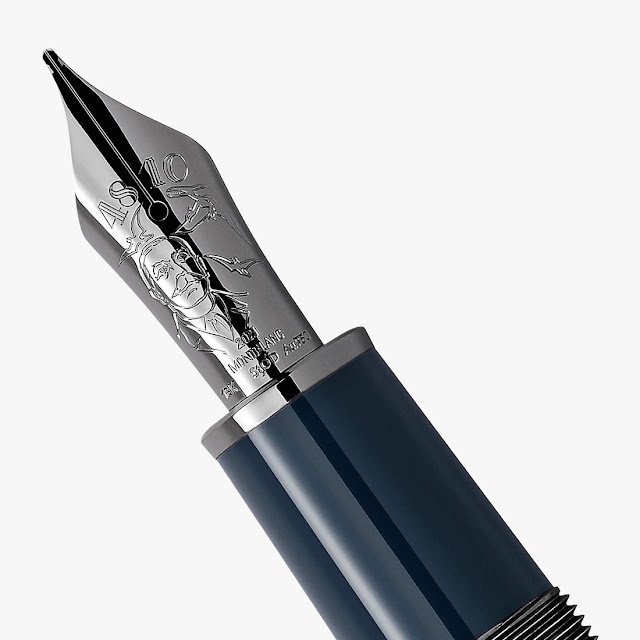 The nib features a portrait of Doyle alongside some flying dinosaurs from another one of Doyle's novels called The Lost World. The year, hallmarks and the classic 4810 are also on the nib and I feel that this nib is really good looking, they manage to pack a tone of cool pictures on the nib without making it look too messy or cluttered. The other interesting thing about this pen is that the nib and trims are ruthenium plated to give it a shadowy dark look which is rare for MB to do but really elevates the theming of this pen. 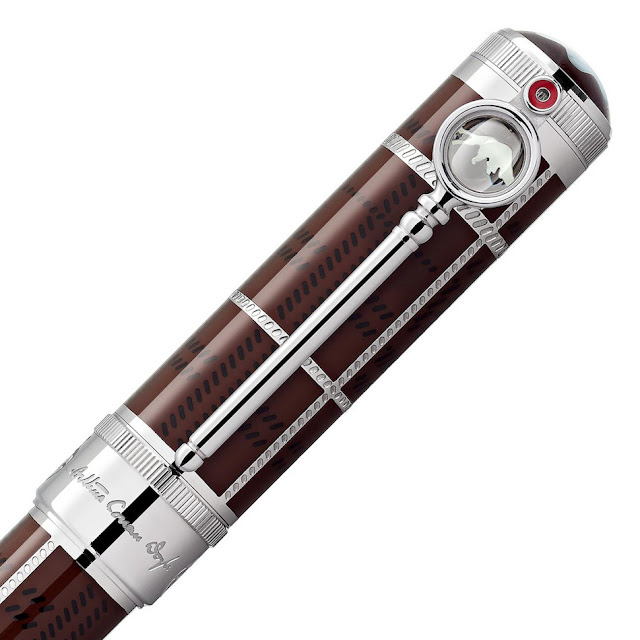 The clip of the pen is meant to look like a combination of a skeleton key that is a common item found in mystery novels as well as a magnifying glass which is an obvious and very cool nod to Sherlock Holmes. 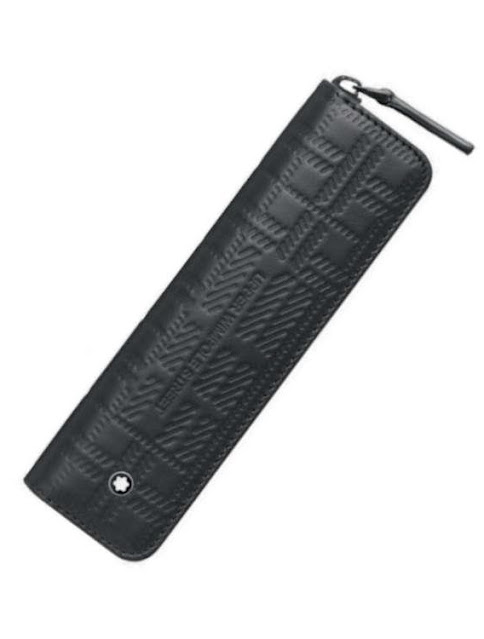 Buy Product
There is also a pen pouch available that sports a similar design that is on the pen itself and I think it's supposed to evoke the image of a tweed suit that Holmes is always wearing. The pouch fits one oversized pen comfortably and is made out of a fine leather.

Make sure to check out all pieces of the collection on the Pen Boutique website!