A Closer Look at the Kaweco Black Crystal: 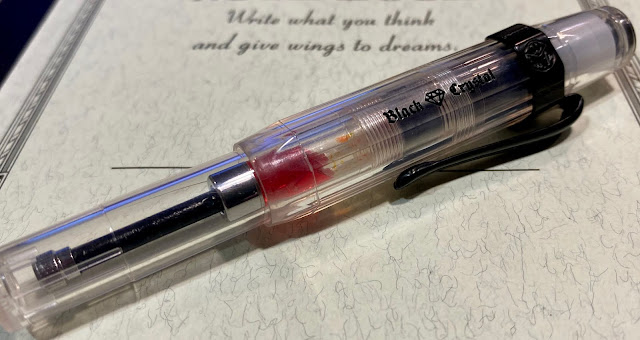 I have already written a blog about the history of Kaweco and the various models that they have produced in the past, this blog is dedicated to the newest U.S. exclusive and I'll be taking a look at past exclusives in this section because of that. Just like most other pen makers, Kaweco doesn't like to shy away from special or limited editions, my favorite line of these special editions is the ART sport which are pretty hard to get and are going to set you back considerably more than a regular sport.

The ART sport is turned from Italian acrylic rods and give the pens a much more luxurious feel as a result. Not all Kaweco limiteds are as crazy as these and are often just special colors that may be specific to one regional market, my favorite example of this is the Orangina which is named after the popular French drink. Despite it being based off of a French drink this pen was specific to the pen market in Spain and is only available through retailers in Spain.

Another beverage based pen is their collaboration with popular brewers, Stella Artois which is like Christmas in a pen, I think for some reason it was only released in South Korea.

In short Kaweco knows how to execute a good looking limited edition that people will want to buy and the Black Crystal is no exception to this, limited to only 1,000 pieces, there was plenty of hype for this release and so far I haven't heard of anyone being disappointed.

Throughout most of Kaweco's special color sport model the same packaging is used and I think it looks quite sleek in comparison to the vintage inspired tin used on their Alsport models. The pen itself comes in a special slip cover that has black crystal designs on it and comes in the aforementioned black tin in place of the vintage. Inside the tin you get a lot more than a regular Kaweco model, pretty much everything you need to start writing with your new pen is included. You get a pack of black Kaweco Cartridges, a converter, a clip, the pen and of course, the beloved Kaweco sticker! I feel this is a really nice touch, especially when you are paying a premium on what is essentially a regular Kaweco Sport with a different color way. 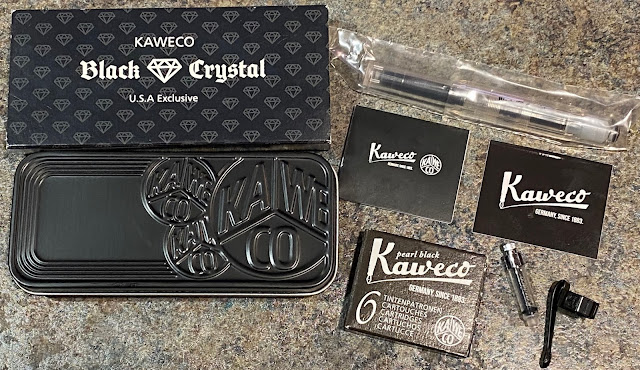 Aside from the packaging the pen itself is similar to a clear model that was already out but this model had gold trims and, in my opinion, does not look as nice as the black crystal. Another thing that sets the black crystal aside is the engraving on the opposite facet from the Kaweco logo that says Black Crystal in a sort of gothic font with a little picture of a crystal separating the two words.

I decided to use the converter because I like the look of it in the demonstrator body and I've inked it with a rather bright ink that is see through, this makes me think of crystals with water or liquid trapped in them from thousands of years ago. 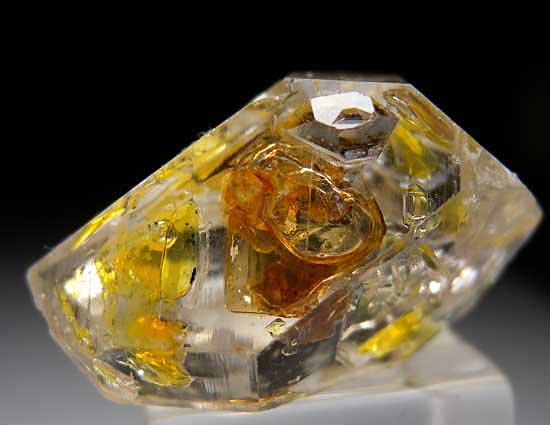 Kind of like that part in Jurassic Park with the mosquito in the amber! I think we've covered everything about the interesting appearance of this pen so lets take a look at the nib and how it writes!

I love the black nib on this pen. This statement may come off rather plain but I think that if this pen had either a chrome or gold toned nib, it would not look nearly as cohesive as it does with the black. I decided to get a Double Broad because I like getting out of the ordinary nibs on all my special or limited release pens and let it be known that this is also my first black coated nib from Kaweco. 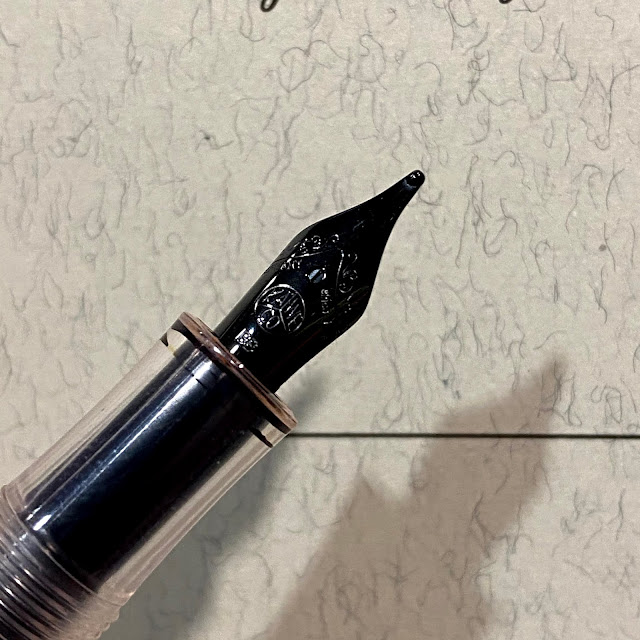 It writes incredibly well out of the box and the BB nib is quite smooth with a satisfying, medium-wet, ink flow that is very nice when paired with a heavy shading ink like Sailor Jentle Apricot! I get that some people prefer the #6 or #8 nibs and I find that #6 is usually my sweet spot but I really don't mind the size of the nib on this pen and it can definitely hold its own against some of the other pens I have in my collection. I don't find the PVD coating really affects the writing and think its for purely aesthetic reasons alone. 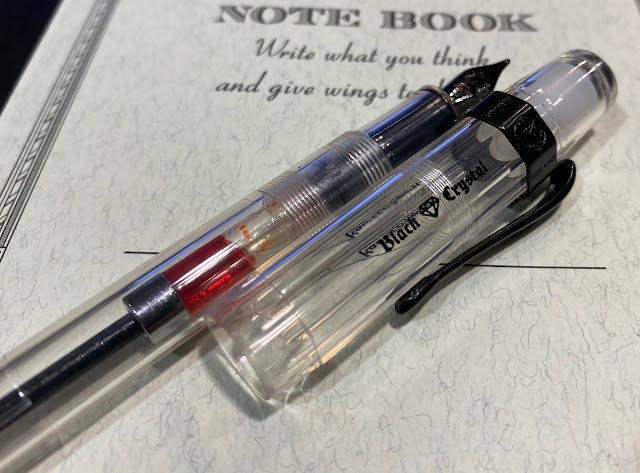 If you are looking for something from Kaweco and want something interesting to look at that is also limited, I think this is a great option because it can go with pretty much any ink. This pen is a little more expensive than the regular sport models but when you take into account that this is basically a starter kit with everything you need, it really isn't too much more than the base line models. The Black Crystal retails at $70 which is a decent price with all the bits and bobs included so if you are on the fence I'd pick one up sooner rather than later because of the limited quantity some places are already sold out of their allotment. Anyways, this has been a closer look at the Kaweco Black Crystal and don't forget, Enjoy & Keep Writing!
-Kyle