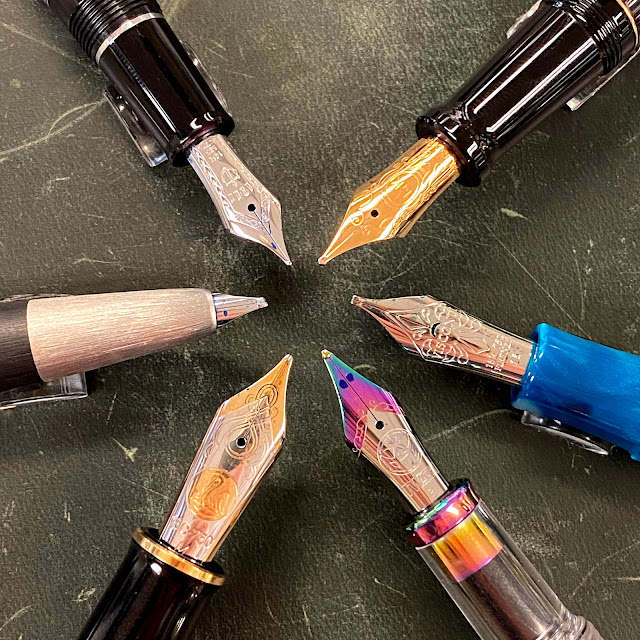 Hey y'all this is Kyle from Pen Boutique and in today's blog I am going to go over my favorite nibs that we carry at Pen Boutique and who makes them. I'll probably be focusing more on gold nibs because those are the majority of the pens that I write with now but maybe I'll throw in some steel just to round out the list. My preference also skews very broad although it didn't used to, when I was first getting into the hobby I would opt for fines or mediums but as my ink collection grew so did the nib size. The reason I love my B nibs is because the ink looks magnificent and completely different most of the time than if I used a finer nib but they do have a rather large drawback. They do not perform well when used on lower quality paper which makes them no good for an office environment but I use all my pens on Tomoe River paper journals so its not something that I really even consider. Now that I've gotten all of the warnings about my bias out of the way lets take a look at the first nib that is on a pen I consider to be nearly perfect! 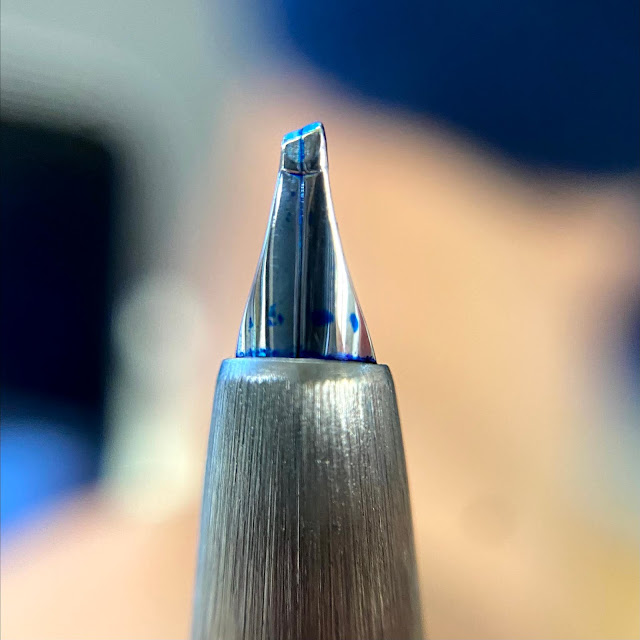 The 2000 is a great pen already but with this nib it's pretty much as close to the perfect pen as you can get, the combination of the relatively calm and unassuming appearance with the crazy nib makes quite a good match. This nib is oblique and leans left, this means that the actual nib is cut on an angle and the angle slopes down to the left which makes it good for people who write with their right hand and especially for people who rotate their pens to the left. It is very rare that a brand offers this nib size from the factory because they are more labor intensive than a regular nib because they not only have to be tipped, they have to be tipped on an angle after being cut and then ground to maintain that angle. 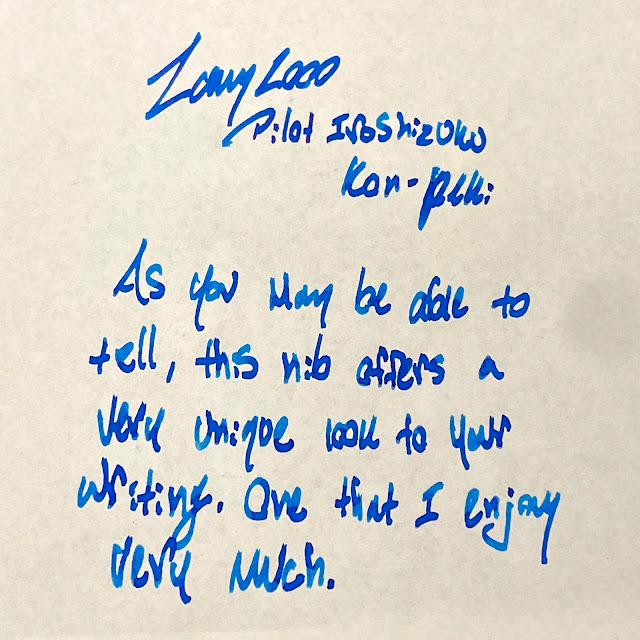 The nib kind of exacerbates the "sweet spot" of the Lamy 2000 nib because it won't work if you don't hold the nib on the exact angle but when you do it is a beautifully smooth writer with a nice medium ink flow and lays down quite a thick line of ink. I've done a writing sample with the one from my personal collection and you can see that it makes even a nice blue look even more beautiful. Lamy also doesn't uncharge for these specialty sizes which is really a selling point for me because that means they are going through extra work at no extra cost to the consumer, really great nib. 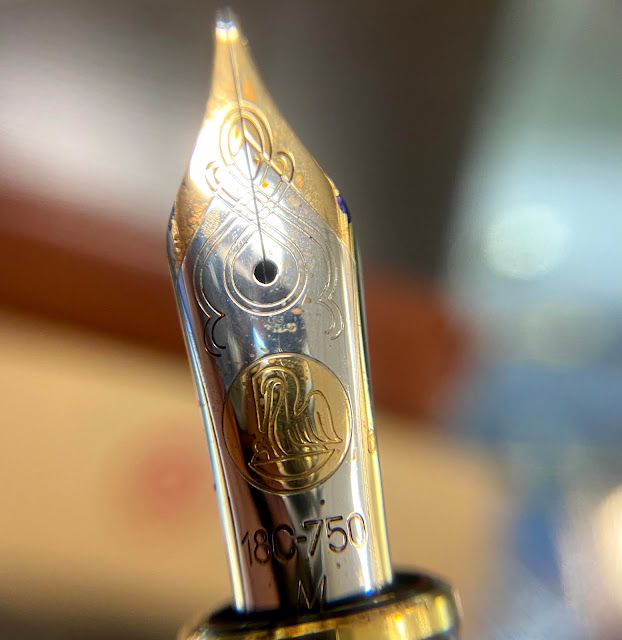 My favorite nib on a flagship pen hands down is the #8 size nib that is featured on the M1000 size of Pelikan's Souverän line. I've only had experience with the M nib as it was purchased when I was still relatively new to the hobby but even for a Medium, in typical Pelikan fashion, it writes more like a conservative B. Something I really enjoy about this nib is how beautiful the scroll work is around the breather hole and I'm just a sucker for 2-tone nibs which seem to be in rare supply these days with brands like Nakaya charging more for 2-tone. The nib is unbelievably springy but not flexible which means that it adjusts for your pressure but you can't go out of your way to push it, you'll see that a little bit with the writing sample that I did below. 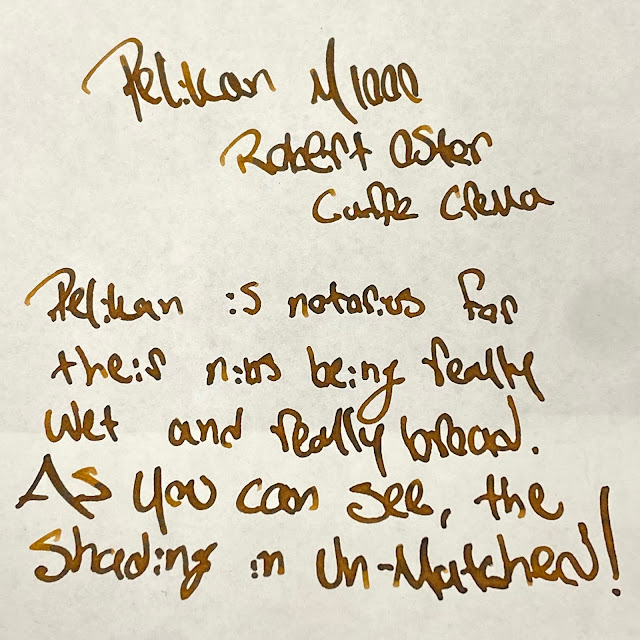 When looking at this, keep in mind that the size stamped on the nib is M but I think you'll find that this may not be the most accurate of size indications, but I really really enjoy this nib. I've inked it with my favorite shader in my collection and if you aren't smitten after seeing how it comes out of this nib then I don't know what to tell yah! For a long time during the pandemic the M1000 was pretty much halted in production but we've just gotten a few in which is great news if you like what you see! 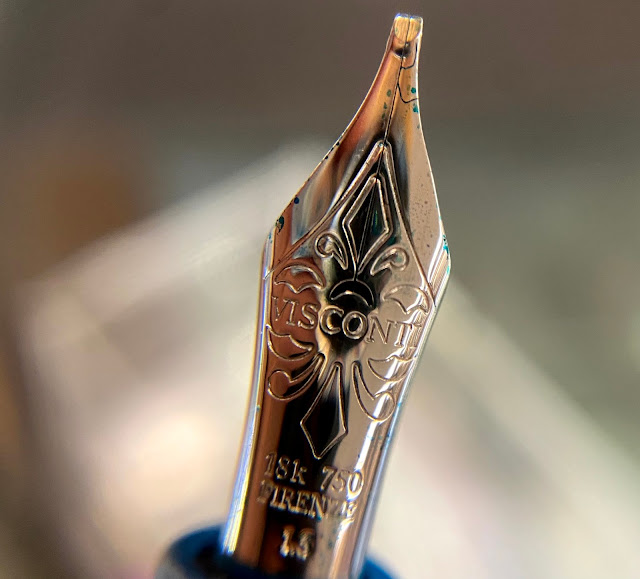 When I purchased my Blue Lagoon I had originally bought it with a Fine nib and it was one of the ones that Bock was still making at the time but then something very unfortunate happened. I was cleaning my pen and didn't know my own strength when unscrewing the nib unit, long story short it needed some replacement so I opted for their new stub that they make themselves. The nib still has the Fleur-di-lis design which I far prefer to the more modern and futuristic stamping that can be seen on some of their newer nibs on the colored lava series. 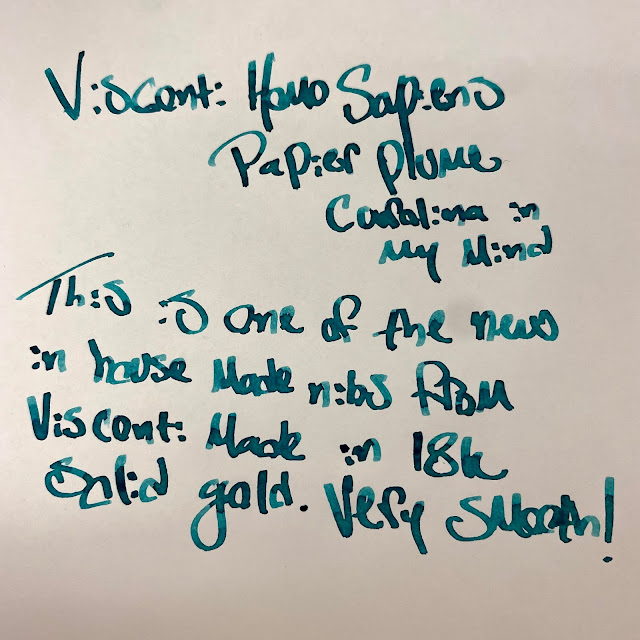 The stub is quite smooth but this one was adjusted for me so I can't speak on its out of the box performance but mine writes beautifully. Even with the rather dry ink that I used for the writing sample, the nib lays down a wet line so much so that it too offers some fantastic shading from my inks. The other nice thing about this stub is that it is tipped which is not always the case with stub nibs and that's what gives it the smooth feel and eliminates any really sharp corners that are sometimes present with stubs. 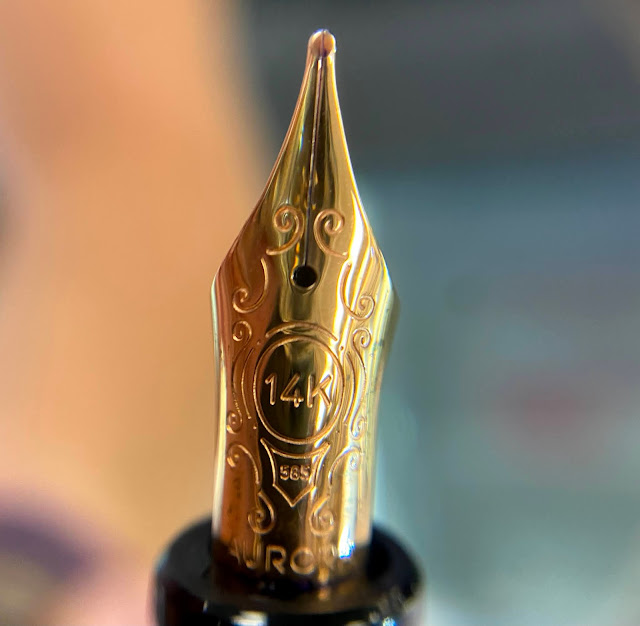 Perhaps one of the most well known brands that make their own nibs, Aurora makes one of the nibs in my collection that I find myself missing after a week of it not being inked but it's not only the nib responsible for that, also the feed! 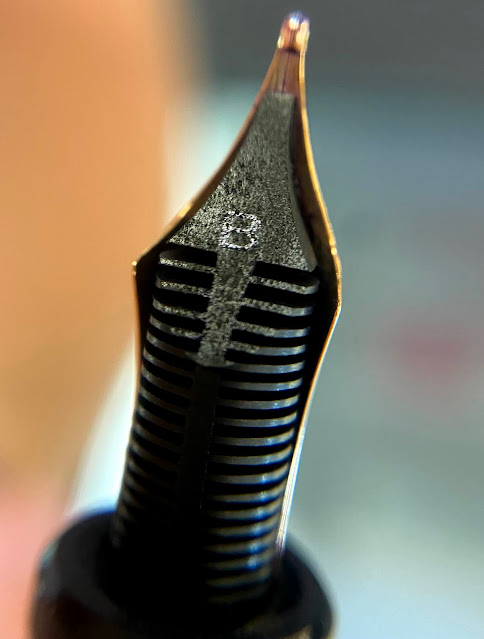 The feed and nib are made by Aurora which is always nice to see as it becomes more and more rare, I prefer this because it means that the brand has complete control over one of the most important parts of the pen. The ebonite (hardened rubber) also makes this pen very consistent because it allows for more ink to saturate on the feed thanks to ebonite being more porous than the regular plastic that has become commonplace in modern pens. They also make one of the most beautiful nibs I've ever, the scroll work accentuates the nibs shape and the gold content is stamped right in the middle to remind you of what you are writing with. The branding is lowered to the bottom of the nib which allows for branding but not over the top to the point of spoiling the look of the nib. The nib size is also on the feed which is the same idea behind not cluttering up the look of the nib and is just a nice little aesthetic touch. 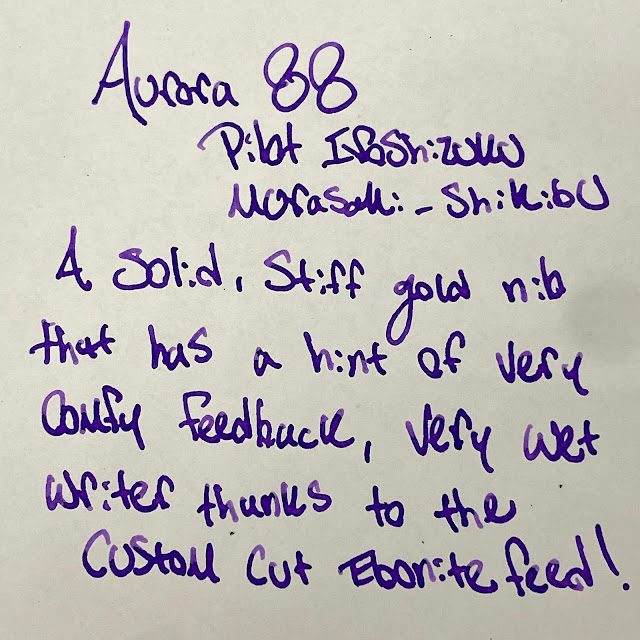 As far as the actual writing experience goes, the nib is quite stiff but not to the point that it inhibits the writing experience. The way I would describe this pen is a very true broad that writes wet and just does its job, not too much to worry about, just a good Broad gold nib! 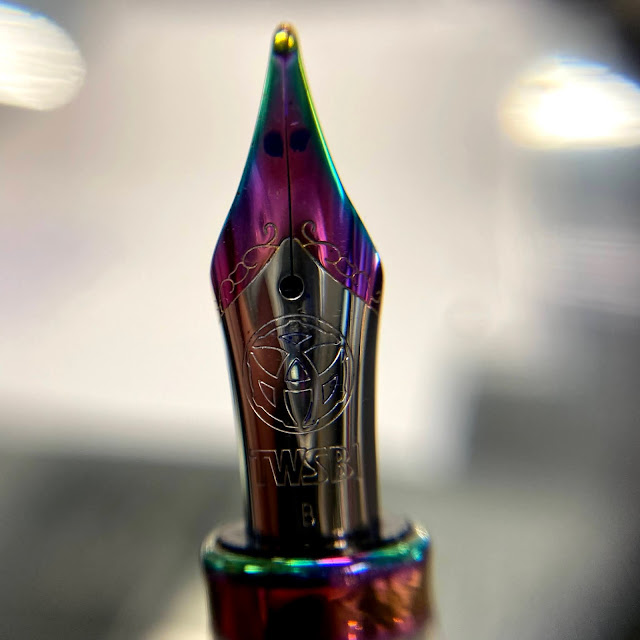 The only non-gold nib pen on this list comes from TWSBI and it is one of their only pens that comes with a full #6 sized nib which is why it also happens to be the only TWSBI that I have in my collection. The color is special edition and no longer available but the exact same pen can be purchased in the plain silver look, it won't affect anything about the writing experience though. The look of the nib doesn't really do it for me but that's not why I bought the pen. It writes exceptionally well for a Steel nib and actually feels smoother than some of the gold nibs I've tried out before. 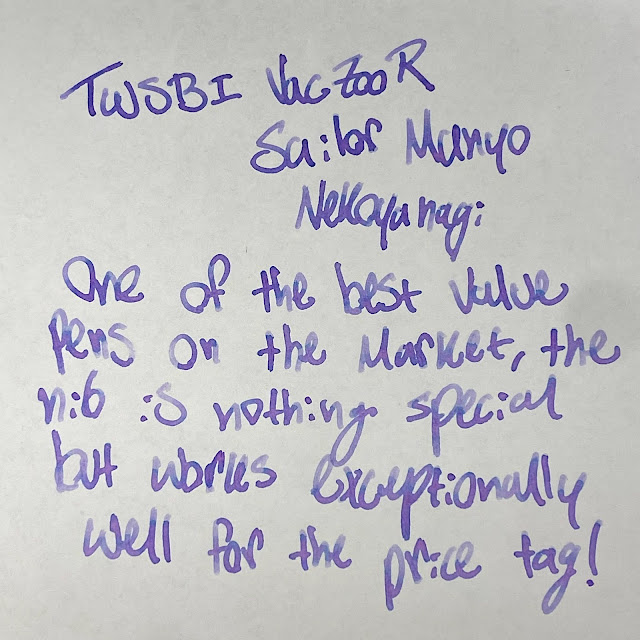 The nib is stiff which should be expected but still writes wet enough to get shading and in this case, color shifting out of your inks. Much like my description of the Aurora nib, this nib doesn't have any character and just functions like a pen should, puts a nice line down on the paper and for a good price which is why I enjoy TWSBI. Solid pen, solid price, that simple. 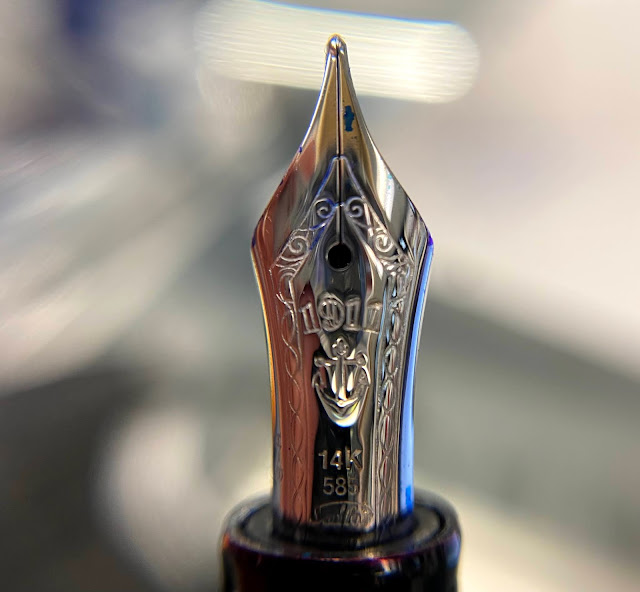 I would be remiss if I didn't mention Sailor on a list all about my favorite nibs because of how unique Sailor does their nibs. First off, they make all of them in house which is already great for the reasons I stated back when talking about Aurora, the other good thing is that all Sailor nibs then gain this distinct feel that is shared between all of their nibs regardless of size (excluding Music and Zoom). The nibs all have a very specific feedback that some people may think feels scratchy but I like to describe it as the same feeling that you get when writing with a freshly sharpened pencil, it doesn't drag on the paper but it lets you know its there. 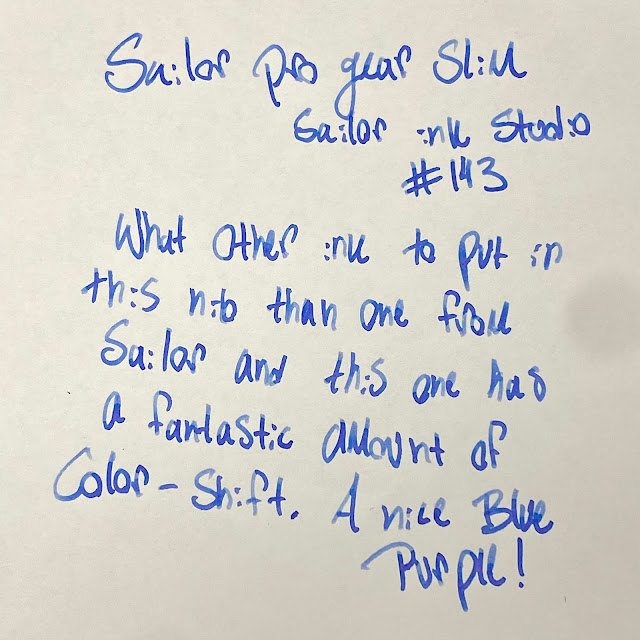 They don't make the wettest nibs but the ink flow is still decent although the nib sizes do run finer than what I prefer because it's a Japanese brand so you'll see in the writing sample above, the B nib really doesn't look like a true B. It's still a unique nib not only because of feel but is also the only nib I've encountered thus far that can be made in 21k gold, granted those were only on the larger sizes but now are being made, at least for the sound of rain series, in the slim size.
That just about wraps up my list, hope you enjoyed it and I hope to catch some of y'all in D.C. for the show.
-Kyle