The Space Race, an era of fierce competition between American and Soviet space programs which led to some of the most impressive and inspiring feats of human ingenuity ever seen, was bookended by two events: the launch of Sputnik in 1957, and the Apollo-Soyuz Test Project in 1975. After almost 20 years of breakneck progress from both sides, which gave us the first man in space, the first spacewalk, the moon landings, and countless other achievements unimaginable a generation before, NASA and their Soviet counterpart the Soviet Academy of Sciences worked together on the Apollo-Soyuz Test Project to kick off a new age of international cooperation in space, the spirit of which lives on today in projects like the International Space Station.
In 1970, the administrator of NASA sent a letter proposing a joint orbital rendezvous between spacecraft from the US and USSR, and the next five years were spent training astronauts and building equipment from both countries to deal with the challenges created by the significant cultural, engineering, and design philosophy differences between the two space programs. The differences in how each organization approached spaceflight were profound, and led to significant difficulties as they worked together to integrate their respective systems.

The American space program we all know and love thinks of astronauts like pilots, "flying" their spacecraft with a similar level of involvement to a pilot flying a plane. In fact, NASA to this day teaches all astronauts who aren't already pilots coming into the program how to fly jets, because they believe having the mindset of a pilot is valuable in space. This approach requires highly trained and relatively independent crew members with an intimate understanding of their craft, but allows for creative solutions in dire circumstances like what happened on Apollo 13. This was diametrically opposed to the Soviet attitude towards their cosmonauts, who were treated more like passengers than pilots. Much of the involvement required of American astronauts in spaceflight was automated for their Soviet counterparts, which has the obvious benefits of reducing required training time and sources of potential human error, at the cost of significantly reduced adaptability.
Another massive difference between the two approaches to spaceflight was their attitudes towards redundancy. In the American space program, a seemingly excessive level of redundancy is expected for all critical components where possible. As an example of this mindset, the computer that did the mission critical calculations for the space shuttle existed in triplicate; three independent computers would do every operation and vote to decide what to do. If one computer consistently voted against the majority, there was a fourth backup that the crew could hook up to replace the suspicious hardware. This was not an attitude shared by the Soviets in their space program. In Soviet craft like the Soyuz, everything had a specific purpose, and if there were any failures of critical equipment, the plan was to abort at earliest convenience. The obvious drawback to this philosophy is that an abort isn't always possible and there's potential for otherwise avoidable loss of life, but this is a less significant risk in the low earth orbit regime Soviet spacecraft operate in, as opposed to the long haul journeys to the moon and back the Apollo module was designed for.
Perhaps most difficult to overcome from a technical standpoint was the incompatibility of the two craft's atmospheres. Prioritizing flame resistance, the Soyuz capsule had a mixed gas atmosphere similar to air at about sea level pressure, as there's a significantly reduced risk of fire inside the capsule compared to a pure oxygen environment with the addition of relatively inert nitrogen. Conversely, the Apollo command module used pure oxygen at 1/5th atmospheric pressure, because it's just as easy to breathe as normal air, but puts less strain on the walls of the capsule and allows for widespread weight savings. Had the two countries not worked together to build the Androgynous Peripheral Attach System (APAS), a unique two-sided airlock that bridged the two spacecraft and served as an adapter between their respective docking standards, the Soyuz side would likely have gone up in flames, and the Apollo side may have popped like a balloon.

On the crew side, the 3 Americans and 2 Soviets who would go on the mission all learned Russian and English respectively, and spoke the native language of the other side for the duration of the rendezvous. According to the oral histories of the American astronauts, while they were training in Russia, they suspected their hotel rooms might be bugged. To test the theory, one of them loudly bemoaned the lack of a pool table in their hotel's lounge. Sure enough, the next morning a pool table had conveniently appeared. While together in orbit, the two crews exchanged 5 flags from each country, addressed TV audiences from around the world, and enjoyed the company of their counterparts in an unprecedented display of unity between the two Cold War powers.
This was the last flight of an Apollo module, as it would soon be replaced by the Space Shuttle as NASA's primary launch vehicle. On the Soviet and now Russian side, the Soyuz is still flying astronauts and cosmonauts to the ISS to this day, and isn't expected to be replaced until at least 2023. 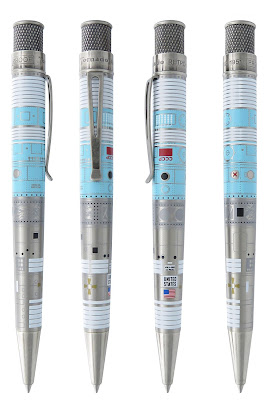 The Pen Boutique exclusive Apollo Soyuz Retro 51 commemorates this iconic moment in the history of space exploration in spectacular fashion. The sky blue upper section of the pen represents the Soyuz capsule, with its two distinctive blue bands. The bottom section's minimal markings, bare metal finish, and cross-shaped R-4D attitude control thrusters represent the exterior of the Apollo CSM, the same craft which carried the crew of Apollo 11 to and from the moon just 6 years prior. Bridging the two sections representing each spacecraft is a grey section representing the APAS, the most concrete example of the hurdles facing this mission and the inspiring efforts taken to overcome them. 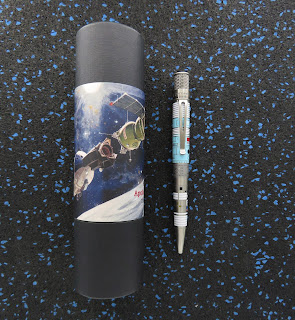 Buy Product
This is a limited edition of only 575 rollerballs, so act quickly if you want to own this beautiful tribute to international cooperation in space!