Hello to all you pen friends, wherever you may be in the world, I hope you are doing well! Recently we got some exciting news that the Perseverance rover landed safely on Mars and was even able to send back video and audio recordings of the mysterious "Red Planet". This really is groundbreaking milestone in the history of space exploration and should be celebrated correctly, and what other way to celebrate than with some space themed stationery items? Let's take a look at perhaps the most obviously themed items that actually are not fountain pens, I speak of none other than the Fisher Space Pen! 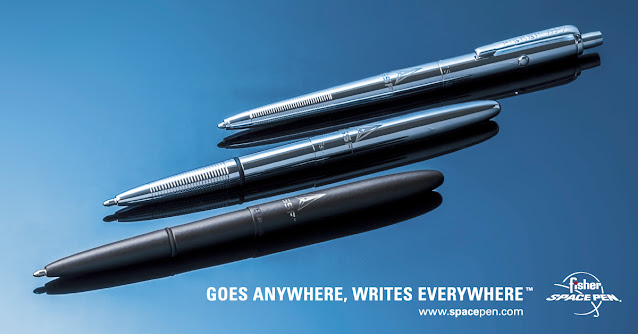 I think that even if you or a loved one doesn't know a lot about pens or stationary, you've heard of Fisher. The brand was born to solve the issue of the unreliable ballpoint pen refill and the final product ended up being almost indestructible. The unique feature of being able to write over grease, underwater and other harsh conditions are what landed the pens debut on the Apollo 7 mission in 1968. The brand now makes a bunch of different pens in a variety of sizes, shapes and colors making them perfect for anyone. I particularly like Fisher pens because they are relatively compact and extremely durable making them a good option to throw in a purse or bag and not have to worry about if it will write or not. Perhaps the most popular of the models is called the Bullet and is the perfect size for a pocket and even has an adjustable clip. The Bullet comes in at around $21.25-$34.00 but I encourage to take a look at the full selection of Fisher products so you can make an informed decision for your own needs! 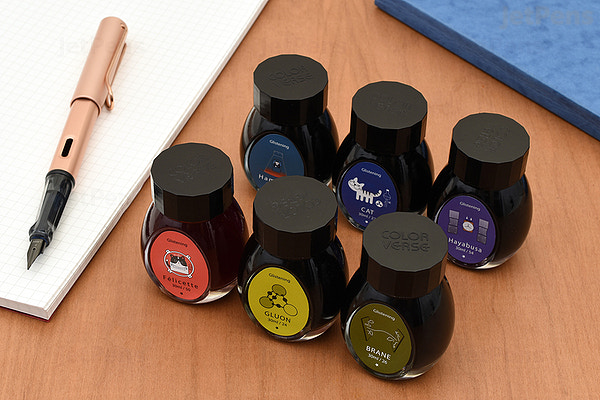 Arguably the stationary brand with the largest commitment to science themes, they have a massive line of inks sure to capture the area of study you're most interested in. The ink brand was started in South Korea with the idea of the universe being boundless and unexplored thus acting as a sort of muse for the brand. The brand makes both shimmer and standard inks which is always a nice thing to see, they also make the same colors (some) in both shimmer and standard which is something pretty unique and to my knowledge is specific to Colorverse. I think my personal favorite would be Hayabusa which is a spectacular purple color that is available in both shimmer and standard. The other nice thing about Colorverse is that they have quite a variety of sizes which means you don't have to commit to a whole bottle of a color you may not like. Colorverse inks are available at a reasonable price range between $6.50-$40 for the bigger box sets. 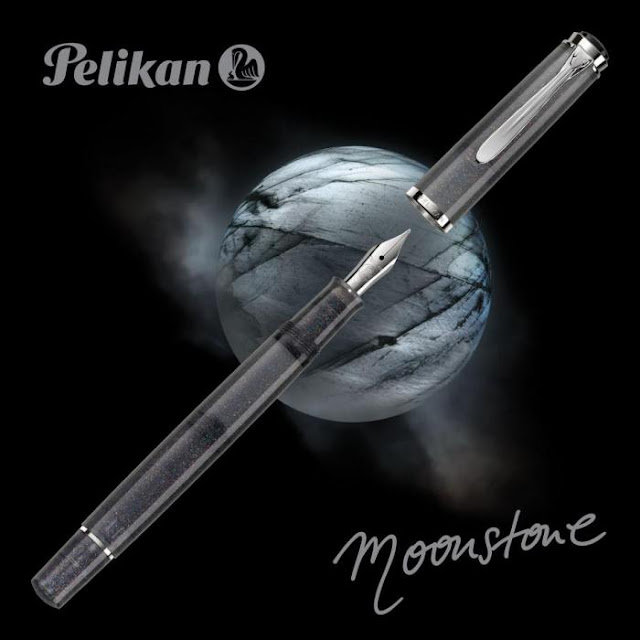 Pelikan is no stranger to releasing some pretty fantastic special edition pens and their M200 special editions are no different. Last year the Special edition color was called Moonstone and was a gray, I'd describe it as a bluish grey ink but the pen is what really shines here. I must admit the initial promotion pictures made the pen look just like a translucent grey pen but it was actually a deeper and shinier pen with flecks of reflective glitter which really makes it more dynamic and colorful. The M200 is a fantastic steel nib pen as well and has a rather bouncy nib which can feel really nice and offer a little line variation, the piston also is very smooth and ink capacity isn't bad either. The moonstone pen comes in at around $192 and $26.25 for the ink but the two can be purchased together as a box set for $216.
Montblanc Starwalker - COSMOS & BLUE PLANET: The Montblanc's theme for  Starwalker - last 2 years has been immersed in the space.  To symbolize that they have the floating Montblanc symbol on a Starwalker pen now enhanced to look like it is blue dome.  Specially produced to celebrate the space exploration and the recognition of our beautiful planet from space - The Montblanc Starwalker pens are breathtaking and a true collectible for years to come.

For the high rollers

This is a pen that I've long lusted over and is one with impeccable attention to detail which is the standard when it comes to the higher price pens that they produce. This pen also placed the universe as its muse and has a portrayal of Adam from the famous Creation of Adam painting. The pen has Sterling detail throughout which adds a satisfying weight but the real prize of this pen is the enamel work. The planets and stars really have an understated beauty as if you were seeing them in the sky. The oversized nib with ebonite feed is buttery smooth and gives a commanding feeling when writing with it, I find that they also get the length of oversized pen right and the weight is also balanced nicely. I believe a small sapphire is also embedded in the clip of the pen which is a nice little detail especially when nestled in a breast pocket. The box for this pen is rather stunning and holds the pen up right in the air almost as a reference to the monolith from Stanley Kubrick's 2001: A Space Odyssey. When I said this pen was for the high rollers I wasn't joking, this pen can be yours for the price of $3,505 so come by and check it out!
さようなら、Kyle