Everyone, whether you are into pens or not, has heard the name Montblanc. It's one of those brands that has ascended the binds of being "just a brand" and is now a deep rooted Icon in not only the pen world but also in what it means to be luxurious. Montblanc has been around since 1906 with their Meisterstuck line being launched in 1924, they quickly rose to international acclaim due to the quality of their writing instruments. Before we get into the list I want to have a quick disclaimer that none of these pens are readily available anymore and are all very high in price, this is not a list of the top 10 MB in production today but my favorite models throughout the brands special edition lines. This list is built on my own opinion and may differ from what you believe should be on a top 10 list, with all that being said lets get into the number 10 spot with a very special pen dedicated to a very special plane. 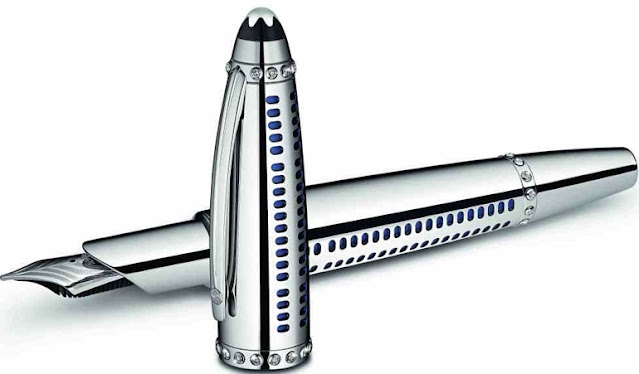 Launched in 2007, Montblanc collaborated with Airbus to design a pen commemorating the largest passenger aircraft, still to this day the A380 remains the largest passenger aircraft fitting up to 555 on its two flight decks. The pen was a limited edition of 380 And was constructed from solid 18k white gold with platinum plated trims. The skeleton name comes from the window like cutouts on the barrel that show the blue precious resin underneath, meant to look like the A380's double decker windows from the outside of the plane. The reason why I included it on the list is the interesting look of the nib when it is uncapped, it almost looks partially hooded and, unlike other MB nibs, doesn't seem to have the 4810 or Montblanc on it but has lines that curve with the nib almost making it look like the lights at the end of a runway. The pen also has 27 VVS grade diamonds to really tie the design together. I am unsure what this pen originally went for or how you could buy it but the only models I've seen for sale now are upwards of $15,000 so if you want one you better start saving! 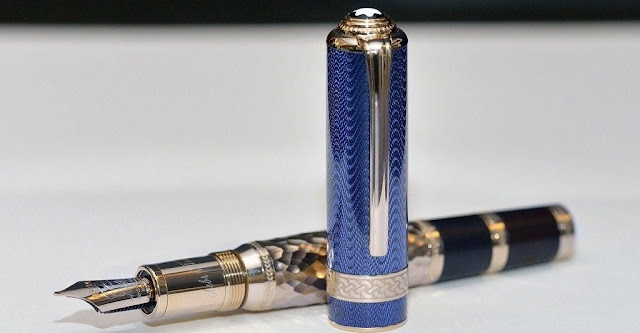 The writer's edition for 2015 was dedicated to Leo Tolstoy and is the second writer's edition featuring a Russian writer, in 1997 the writer's edition was dedicated to Fyodor Dostoevsky. This was the first writer's edition to get a 4810 edition along with the 1868 edition pictured here which is rather interesting that they didn't start making more limited writers variants before 2015. The edition number 1868 refers to the year his most well known work, War and Peace, first came out. This pen is just beautiful, the cap has a guilloche pattern with blue enamel work over it, gold plated trims go very well in complimenting the blue enamel. The body of the pen is a hammered gold plated metal and below that there is wood detailing with a malachite gemstone on the bottom of the pen. The design on the trim is one that was commonly on peasant's smocks because Tolstoy often wore a smock due to his longing for the life of a farmer. The blue and gold color scheme was chosen because this was the color scheme for the first edition of his book, War and Peace. While these did come out relatively recently, you will be hard pressed to find the 1868 editions which usually go for around $4,000.

Originally released in 2001 as a celebration of the first skeletonized pen made by Montblanc in 1999, the original was made as a 75th anniversary celebration for the Meisterstuck line, the skeleton was the first pen of its kind to use the delicate technique exposing the precious resin beneath.  The Montblanc snow cap is made of inlayed mother of pearl, this pen was an addition of only 333 and has grown to be one of the most sought after collector's pieces in the brands history. The pen is in the 149 size which makes it quite special because the 149 is often referred to as the Diplomat size and is the top of the Meisterstuck line. Because of this pens small edition size and renowned beauty in the pen collecting world the prices are quite high now, some have sold for as low as $8,000 with one listed right now for $22,000.

Released in 2006 for the Patron of Art series, this pen was dedicated to Sir Henry Tate who was a sugar merchant and philanthropist. He is probably most well known for establishing the Tate gallery in London which has one of the most impressive collections of art to this day. The more limited 888 version of this release was equipped with a beautiful guilloche pattern under red enamel work, the designs on the barrel are meant to be reminiscent of the architecture of the Tate gallery. The cap also has some diamonds inlayed under the snow cap logo but the real prize on this pen is the nib system. Much like the early safety pens of Montblanc, this pen has a retractable nib that can come into the body which is quite a complex and rare system to see on modern pens. The nib is also adorned with sugar crops because thats what lead to Tate's success. These are rather expensive because the unique features make it quite a popular collection piece, I've seen this go for around $6-$8K. 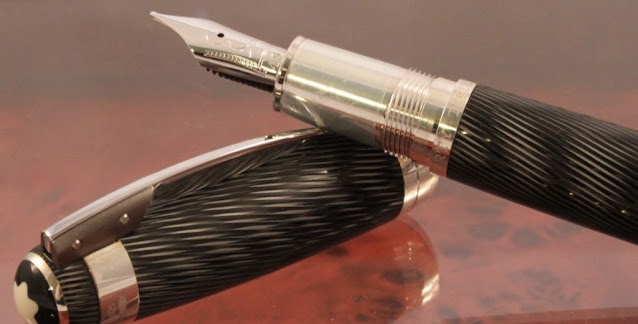 Whether you are a film buff or not, everyone knows of Alfred Hitchcock for his timeless and important works such as Vertigo, The birds, Psycho, Rear window, to name a few. The Alfred Hitchcock is one of my favorite Montblanc pens because it packs in the most detail about Hitchcock possible while still making a classy looking pen. The clip is shaped like a knife which is a nod to Psycho, the body is meant to be reminiscent of the opening sequence of Vertigo, and there are so many more hidden features on this pen. Hitchcock's side profile portrait is also featured on the nib and is one of the most elegant looking MB nibs I've seen on a special edition model. This pen is quite heavy and with its relatively small silhouette, compared to other special editions, making it feel rather substantial in the hand. This pen is very coveted and hard to find but I've seen a few pop up in the price range of $3,500-$5,000.

The writer's edition for the year 1999 was one that turned out exceptionally well, dedicated to Marcel Proust, one of the most culturally relevant French writers of his time. The barrel is equipped with eight facets and a solid sterling silver overlay that has beautiful engraving work in a scroll design. The nib on this pen features an hour glass which is a nod to the writer's most popular work, Remembrance of Things Past. This design has popped up relatively recently on the Montblanc Egyptomania solitaire which also has a sterling silver overlay but features hieroglyphics instead of scroll work. These pens were a rather large edition of 17,000 pieces but still command a decent price on the after market, usually between around $1,500-$3,000. 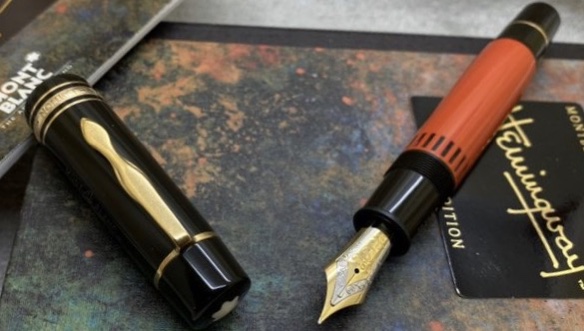 Another Writer's edition, the Ernest Hemingway was the first of the series, originally released in 1992. The Hemingway is one of the only special edition Montblanc pens that comes with a number 9 nib, the same nib featured on the 149. The model of this pen is actually based on the 139 silhouette that is similar to the 149 but has squared off ends instead of round, there are also some other subtle differences between the two models. The pen is very toned down in terms of design and has a red resin body with gold trims, this is often sited as one of the best entries in the writer's edition line and the luxurious subtlety may be the reason for that. These are very hard to find now with most collectors holding onto the better condition models, if you are lucky and can find one for sale expect to pay somewhere around $2,000-$4,000. 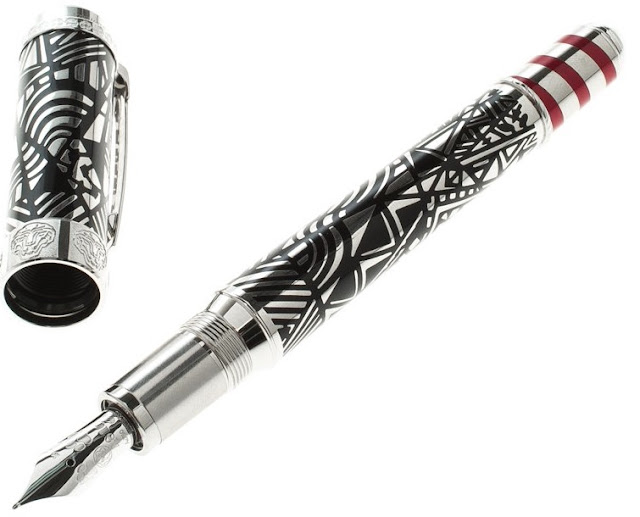 
The 2016 edition of the Patron of Art series was dedicated to Peggy Guggenheim who was an art collector as well as a socialite. She is most known for the Guggenheim gallery in New York. The pen itself is covered in platinum plated Art Deco patterns as a nod to her art collection, the gaps are filled with a black lacquer. The cone at the end of the pen has a red spiral design which is meant to look like the mooring poles used in Venice for the boats which is where she decided to exhibit her collection. The nib also has some dog paw prints that are in memory of her beloved Lhasa Apsos dogs. The pen had three editions but the 4810 edition is my favorite of the three because it feels more true to the art deco era. Since this is a relatively recent model they are somewhat easier to find compared to other pens on the list and can be found between $2,200-$4,000. 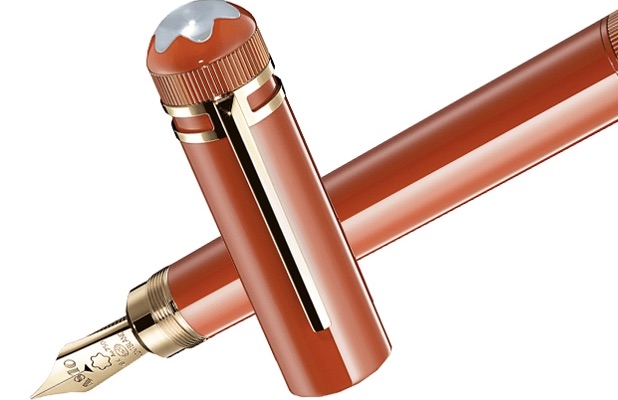 This is a very special addition to the Heritage collection because it is essentially a bigger size of one of the brands very early models, the simplo safety pen. This pen comes in both coral red and black precious resin with a massive snow cap logo that is a mother of pearl inlay. The actual pen is quite simple, no pun intended, and has a minimal design but the actual pen is quite large and is actually bigger than the 149 which itself is already a big pen. The size of this pen gave it the nickname "Goliath" as it would be comparable to something like the Namiki Emperor which is a very large pen. Both colors were an edition of 333 which is a nod to the 3 founders of the brand. The 1914 features a retractable nib much like the Tate which I mentioned earlier which makes the pen quite a bit more complex than it would appear. This pen was not cheap when it came out and is not going to be cheap on the secondary market, from what I can tell the Coral red is harder to find on the secondary market but you are looking at somewhere between $10,000-$17,000. 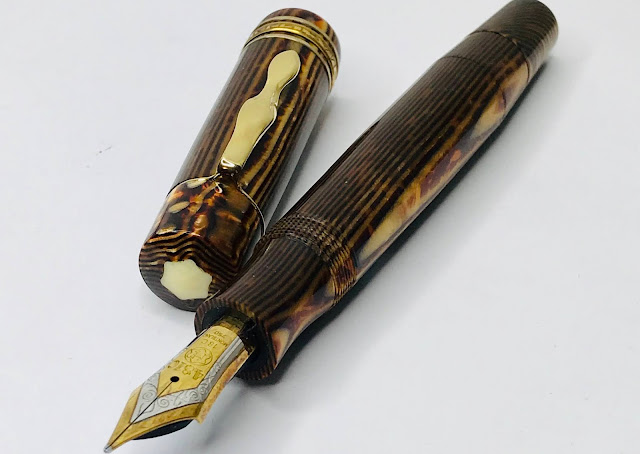 The top spot was very hard to pick and I ended up with a custom pen that uses original Montblanc trims, systems, and the nib so the only thing custom is the actual rod used to make the pen. The pen is based on the 139 silhouette and is made using an Arco Celluloid rod, one of the most coveted and rare materials to make pens out of due to the fact that it's beautiful and illegal to manufacture now.  The process to make this rod stock was very dangerous due to the high flammability of the material and thus is not being made anymore, the rods that are out there now are it. A custom 139 was made with one of these rods by an artisan based in Germany and there is only one in existence that I know of, and has never been inked or even dipped. The pen is currently for sale at the price of £3,550 and is truly a one of a kind example of a custom pen made with original parts from the 1950's.
-Kyle